Tumbling Side Stations and Drills

So I really enjoyed doing the post yesterday on bars side stations and I thought I would do a similar one today with tumbling. I have a couple different ways of dealing with tumbling depending on the level. With rec I generally like to make circuits, a lot of which doesn’t change from week to week so that the gymnasts know the expectations of each drill, and when I get to team I generally like making tumbling cicuits, where both corners are being utilized, but also generally the tumbl trak and a bunch of smaller stations placed along the edges of the floor. This way everyone is always doing something.

This first drill is a really nice cartwheel drill that I like. It really does help kids get kicking over the top well. There is one major thing to watch out for though, and that’s that it CAN encourage kids to arch their backs in their cartwheels which is something you don’t want. So if you do this drill I would recommend having kids lay on both their stomach and their backs first with their legs straddled (like in the middle of a cartwheel) and have them squeeze everything. That way they can feel what straight is like.

This second drill is one that I generally start around level 2 or 3. Spotted to start, because I want them to get the shapes right. It’s a good way to work leg strength, turn over and muscle memory all at the same time. 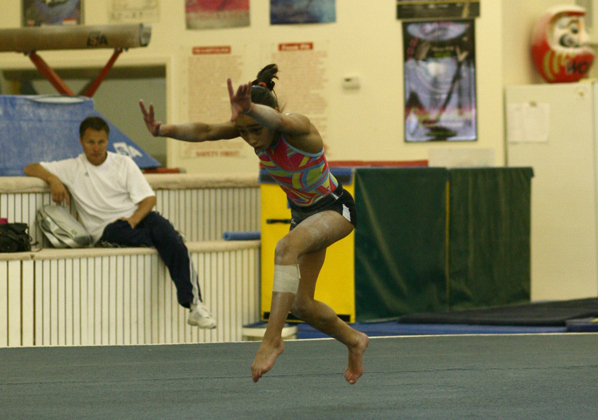