Today I’m going to share two quick drills that I have had a lot of success with in terms of using them as “fixes.” These aren’t always my go to drills (or set of progressions), but I have found them very, very useful in certain situations and definitely pull them out from time to time, especially when it comes to fixing certain aspects of vaults. 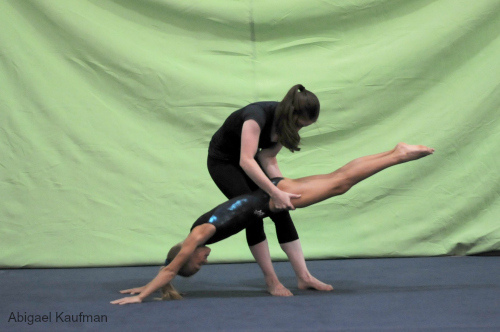 This first one I like, but I find myself not liking to use it AS MUCH, in terms of an every day drill because of the chest position on the first springboard. That being said, there is one specific type of kid I love this drill for. Kids who bend their arms on the table. Some of them bend their arms due to other technical flaws in the vault. But some of them just bend them on contact. This helps that DRAMATICALLY. Mostly because if they keep their arms straight and their bodies tight, the pop off the second board is real and noticeable. If they bend their arms, they aren’t going anywhere. It gives them a VERY different feeling, enough so that I’ve found most kids can translate the correct to the vault.

This second video has two drills but I’m really just going to talk about the hurdle drill. Again, not one I pull out a lot because it’s SO over exaggerated, but, that being said, I’ve had a couple kids who had a really severe lean on the board and just couldn’t figure out how to get their feet in front of them. This helped them figure it out incredibly quickly. Couple things about this drill, well mostly just one. If you are going to do it (which I recommend everyone does at least once) make sure you aren’t using a new cheese mat, or if you are use a small one and throw an 8″ over it. New cheese mats are too hard for this drill. You really want your kids landing on an old beat up cheese mat (with an 8″ under it too so it can slide).