So I’m going to talk a little today about breaking down/slowing down tumbling skills so that gymnasts can learn the shapes. Especially skills where the shapes are…maybe not, common I think it’s especially important to take very small steps when teaching them so that you don’t have to fix it later. One of skills I’m going to talk about today is front layouts. Fixing front layouts is SO HARD. It’s worth putting in the time at the beginning. 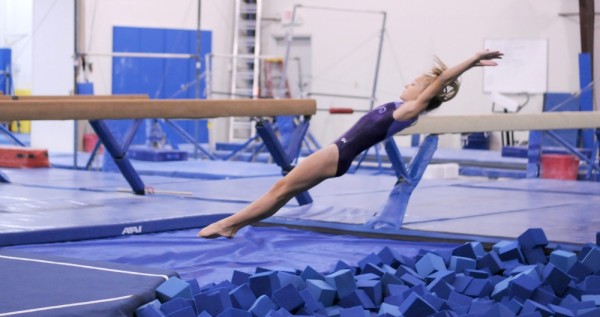 This first video is of a front layout drill I really like. It’s easy for kids to do (especially over and over again) and it does a great job of creating a good shape and letting kids feel it. But if you don’t start with this drill or drills like it, you will probably end up with something that either looks like an open front pike or a pike-arch whip thing which, once they’ve done that for a few weeks is incredibly hard to fix. Also, it’s incredibly hard to tumble out of.

This second drill is a round-off drill. I probably wouldn’t do it on a flat surface like this until your kids are proficient. I would probably do the same thing but add a second panel mat so the feet end lower than the hands. This way the gymnast has a little more time and they can still practice good shapes. But I especially like the end, taking out the rebound, encouraging the flat hips with the fall.